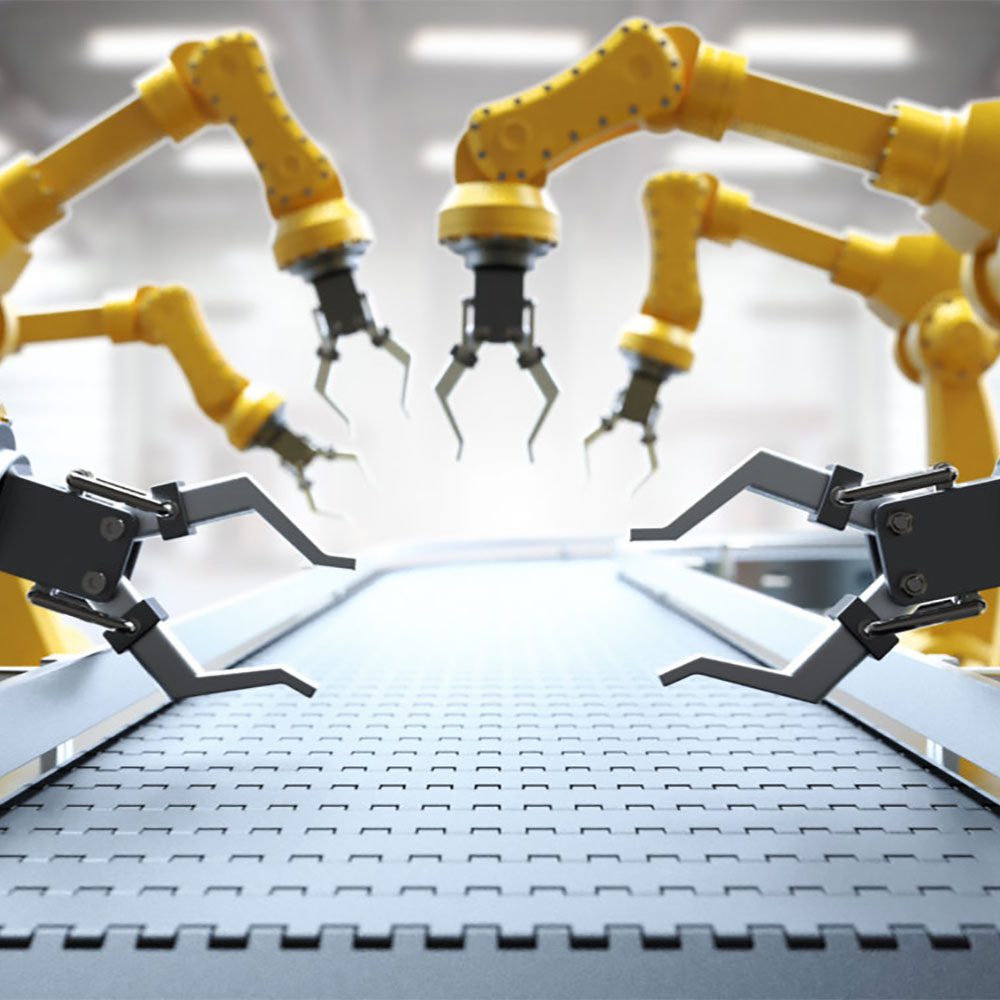 The technologies behind robots have progressed drastically in the last decade and there has been a real push to find the one solution that will fit all applications. Unfortunately, as the technology has increased so has the opportunities for robots to be deployed doing increasingly more complex tasks in industrial automation. Although there is no doubt that newer, more compliant robotic hands such as the Robotiq 3-Finger adaptive gripper are the wave of the future, for now there are still too many specific tasks needing to be completed by industrial robots to have just one solution.

Articulated robots consist of a series of rotary joints called axis that allow the arm to make complex movements that other robots cannot. Most articulated industrial robots have between four and six rotary joints and connect to a single base with 360° of rotation. Even though articulated robots can be very small like Universal Robots’ UR3 or the ABB YuMi family of robots,  the majority of industrial applications are large and used to maneuver big heavy objects into place such as in a car assembly line or for robotic welding applications. This style of robot is chosen when the freedom of movement outweighs the complex programming required and floor space needed to contain the robot.

Cartesian is the most common type of robot used in industrial application due to the simple nature of working on a 3-axis Cartesian coordinate system although a wrist can be attached to allow for an additional rotational axis. The linear action of this style of robot makes it very easy to program and set up. Most Cartesian robots come with the ability to fully customize most of the components and this allows users to have full control over parameters such as speed and the amount of stroke. This style of robot is typically assembled by the end user and therefore can be configured to meet the specific application.

Cylindrical robots work in a rotational movement and typically have a linear motion prismatic joint to move up and down. This allows for a simple design that takes up less space due to the cylindrical operational footprint and grants access for the robot to work anywhere around the center of the base. They are most commonly used for simple actions of picking workpieces or material up and rotating before placing the item.

SCARA style robots like the Fanuc SR-3iA are great for pick and place, small assembly applications, screwing type tasks and are great for dispensing. SCARA robots are typically compliant in two axis while the third remains rigid. The work envelope is cylindrical shaped although cables or hoses exiting from the back may limit this range of motion. They are more of a complete solution as they come fully assemble minus the end effector.

Delta is the fastest and most precise robot type commonly used in pick and pace applications like this Igus drylinE. They are constructed of arms made of parallelograms that are joined to a center base which utilize a single end effector, usually a suction cup. This over-actuated geometry keep the end effector oriented while the objects are picked and due to the small inertia, they can be accelerated very rapidly.  Delta robots are ideal for picking objects and moving them into containers or boxes because of the unique dome shaped work envelope but are somewhat complex to program.

As competitive factors drive factory floors to automate tasks, manufacturers are turning more towards robotic solutions to increase efficiency within production and lower the cost of goods to remain competitive. Robots are a great solution for the automation needs and can serve many purposes on the factory floor.

Pick and place applications are perfect high speed, repetitive tasks that are not ideal for human operators. Robots can perform millions of cycles without stopping and complete operations with accuracy and dexterity that are hard to achieve otherwise. Pick and place robots are very flexible and used in conveyor systems, cells, production and packaging line set ups.

Spot Welding is the most common type of welding application for industrial robotics use which applies intense heat to a concentrated area to melt two metal joints together. The process is most commonly used in automotive manufacturing process due to the industry utilizing thin sheet metal frames that can be attached using this method. The robot can help prevent burns and exposure of harmful fumes to humans, decreasing the risk associated with welding.

Material Handling robots create efficiency by transporting parts or products at scale. The increase in productivity is due to the speed of the robots, running cycles for long periods of time with no need to stop, reliability and reducing risk associated with material handling. They generally interface with other equipment including conveyors, collision detection systems, containers, automated retrieval systems and carousels.  Material handling robots are extremely flexible and can even be redeployed to other areas of the factory if production changes are needed.

Machine Tending robots move parts or products from a staging position and orient them in a way that they can then interact with the machine and then remove the part once the operation is complete. These robots tend to provide more complex movements and capabilities than other more basic material handling applications which make them ideal for industrial automation. The repeatability, long run times and accuracy are the main reasons machine tending robots are deployed to reduce costs.

As with all the robot types, the interface between the robot and the workpiece is very important and often requires specialized or custom end of arm tooling. These setups are typically designed or configured specific to the application environment where the industrial robot is being deployed. They can range from very basic grippers when moving a single part to extremely complex vacuum systems for automotive demolding operations. There are many accessories that can be attached to aid in the objective and allow for the robot to better complete tasks.

Grippers are positioned at the end of the robot arm enabling the robot to hold onto an object with the cycle of tightening, handling and releasing of the part. Although grippers can come in many forms such as Soft Robotics mGrip, mechanical style grippers often have two, three or up to five fingers used to grasp the workpiece. These grippers are often produced using lightweight additive manufacturing or traditional CNC machining and are perfect for industrial automation applications.

Vacuum cups operate using the Bernoulli Principle for generating high-speed air flow to interact between the workpiece surface and the vacuum cup. This type of tooling is used a lot in food production and material handling systems where the products to be transported are smooth, flat and clean. Vacuum cup type grasping is dependent on getting a good seal to the surface of the part to be moved.

Force torque sensors allow feedback to the robot in an otherwise rigid operation by detecting forces and torques that are applied on the robot tooling. As with the multi-axis ATI force torque sensor, the sensor can relay this information back to the robot so it can course correct and continue its motion. Some of the typical industrial automation applications for this type of sensor are grinding, polishing, and assembly. Recent developments have opened up the sensors to be used in collaborative applications to help with advanced programming for teaching the robot or giving it human like touch while performing operations.

Tool changers are used to easily adapt multiple tools to the end of a robot arm. They generally consist of two mating parts, a master and the tool, which are designed to lock together using manual or pneumatic mechanisms. Quick changers like Gimatic QC75 make it quick and efficient to change tooling for different operations without the need to manually unbolt and re-bolt the new tooling. There are many safety features built into the tool changer systems to ensure the load will not be lost in case of air pressure loss.

Rotary attachments such as ATI’s material removal tools allow the often linear or pivoting motion of the robot to be translated into a rotary motion used to perform actions such as deburring and surface finishing like sanding or polishing. By using the robots to complete these traditionally manual tasks, the end result is much more consistence, risk to humans is reduced and challenging operations can be handled with programming techniques.

The Future of Industrial Automation

Industrial robots are an important factor in being able to keep up with the world’s demand for goods and to help drive down the costs associated with trying to manufacture at such volumes. As technologies continue to develop, it is forecasted that industrial automation will continue to rise alongside other technologies and become even more of an integral part of manufacturing around the world. Industrial automation is a key factor in being able to sustain growth for a business both large and small and with the help of robotics, it is making it easier for industries continue to adapt to an every changing market place.

Fairlane was established in 1957 in Fraser, MI and designs, manufactures and stocks a wide range of standard components used in positioning and workholding applications. Fixtureworks, a related business, supplies an extended range of standard machine components and complete workholding solutions from work leading manufacturers. Recently Fairlane has developed a web-based design application aimed at the end of arm tooling industry. It uses intuitive CAD to help users design and purchase custom gripping components in minutes.

Need a custom gripper? Reduce your design time by up to 95%.

Select your gripper module and let GripShape’s advanced configurator go to work generating the finger geometry for you. 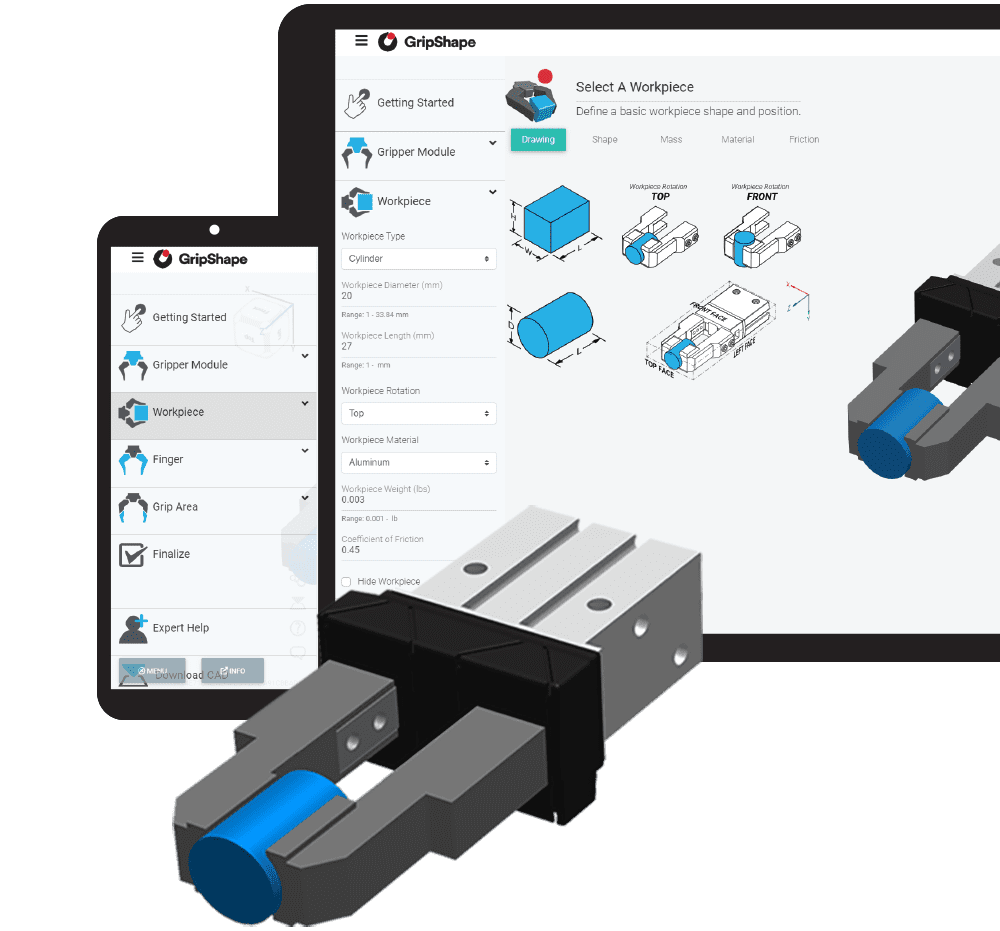 Interested in our standard parts or just want more information
on how our experts can help with your design project?